In the last twenty years, the systematic archaeological investigation of Mycenae is conducted under the auspices of the Athens Archaeological Society, sponsored and supported by Dickinson College, the INSTAP, and the Mycenaean Foundation. Fieldwork was carried out by an interdisciplinary and international team of 20 archaeologists and specialists led by Prof. C. Maggidis, and was run as a field school which offered top field training to 320 undergraduate and graduate students from all over the world (http://mycenae-excavations.org/people.html)

In the period 2002-2008, we excavated inside the citadel and unearthed a building (K) that yielded hundreds of important finds (http://mycenae-excavations.org/citadel.html); the final publication is currently in working progress.

Meanwhile, a systematic remote-sensing survey commenced in 2003 under the auspices of the Athens Archaeological Society in collaboration with Dickinson College, INSTAP, the Mycenaean Foundation, and the University of Thessaloniki; the geophysical survey applied various methods and techniques (ground penetrating radar, geomagnetometry, electrical resistivity, satellite/aerial photography) to map all buried structures in the area around the citadel and create a 3D digital model of the Lower Town of Mycenae (http://mycenae-excavations.org/gis.html). Preliminary results of the geophysical survey were published in professional journals and were presented at international conferences and guest lectures. The final publication by C. Maggidis et al. (A. Stamos, K. Vouvalidis, G. Tsokas, P. Karkanas, E. Blinkhorn, N. Lianos, R. Shears, D. Fallu), The Lower Town of Mycenae I: Geophysical Survey 2003-2013), has been submitted for publication (http://mycenae-excavations.org/research.html).

After the completion of the first phase of the geophysical survey, we expropriated the most promising part of the surveyed land (four acres) thanks to a generous grant of Ch. and M. Case, J. Wagman, and the Roberts Fund of the Classical Studies Department. In the period 2007-2013, we conducted the systematic excavation of the Lower Town of Mycenae (the first of a Mycenaean urban center of that size and importance) under the auspices of the Archaeological Society of Athens with the collaboration of INSTAP, the Mycenaean Foundation, and the University of Thessaloniki. The geophysical survey and systematic excavation of the Lower Town at Mycenae (2003-2013) revealed an extensive Mycenaean settlement outside the citadel, which was protected by an outer fortification wall with gates, as well as overlying structures and buildings dating to the Early Iron Age (PG/G houses, workshops, silos, retaining walls, graves) and the Archaic period, thus establishing for the first time a continuous, well-stratified occupation of Mycenae in all the successive periods from the 13th century BC to the 6th century BC. Such strong confirmation of continued presence following the decline of the palatial center of Mycenae and the subsequent political decentralization, economic collapse, and social dissolution, becomes very important, as it complements and reinforces the post-Mycenaean archaeological picture of transition in the Early Iron Age Argolid and substantiates cultural continuity in the region. The exploration of the lay-out, borders, size, and modified landscape of the town has radically changed the topography of Mycenae, and offered a better understanding of the dynamic interaction between town and palace, ancient economy and environment (http://mycenae-excavations.org/lower_town.html). Preliminary results of the excavation were published in professional journals and were presented at international conferences and guest lectures. The final publication by C. Maggidis et al. (H. Dierckx, A. Psychas, I. Moutafi, E. Margariti, D. Reese, N. Zacharias, N. Lianos), The Lower Town of Mycenae II: Excavations 2007-2013 is currently in working progress (http://mycenae-excavations.org/research.html).

The recent discovery (2014) of a huge stone fragment of the Mycenaean royal throne in the dry riverbed of Chavos, right below the palace of Mycenae, stirred strong academic and public interest on account of the unique find (the only throne of a Mycenaean palace ever found so far on mainland Greece), its archaeological importance and special semantic value as a symbol connected with myth and ancient literary tradition. The multifaceted interdisciplinary study of the find proved that it can be securely identified as the throne of the last phase of the Mycenae palace (1250-1200 BC). Such identification is based on solid, diverse and interlaced argumentation, including archaeological, morphological, technical, geological, topographical, and literary evidence, comparanda, comparative study of dimensions and proportions, and examination of impact traces. The throne of Mycenae prove to be one of the most splendid finds of the Mycenaean civilization. The royal throne of Mycenae was presented in an international press conference for 80 newspapers, TV channels, and electronic media from around the globe, an open public lecture in Athens, and two international conferences papers (Aegeum 17, ΑΕΠΕΛ 2); the final publication is underway (http://mycenae-excavations.org/research.html).

The startling discovery of the Lower Town and of the palace throne some 130 years after Schliemann’s discoveries at Mycenae have been enjoying global publicity in both professional and popular media (http://mycenae-excavations.org/news.html). 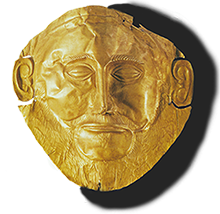